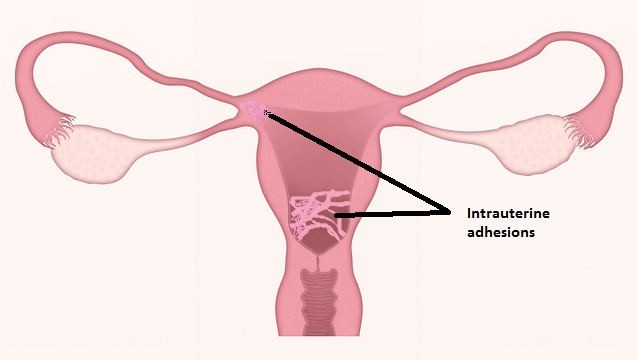 In 1894, Heinrich Fritsch had first described this syndrome. Later Joseph G. Asherman explained the symptoms and pathology of this condition.

Incomplete abortion, postpartum hemorrhage, and voluntary abortion are often required repeated application of curettage, which leads to traumatic injury in endometrial. Resultant of this leads to the development of Asherman syndrome. Apart from these, diagnostic curettage, hysterotomy, myomectomy, cesarean section, and tuberculosis are other contributory conditions responsible for Asherman syndrome development.

Hysteroscopy is the most reliable method for the detection of Asherman syndrome. It allows direct visualization of the uterus. Sonohysterography, hysterosalpingogram, and magnetic resonance imaging are the other methods have applied to detect this condition. Hysteroscopic adhesiolysis is recommended to treat intrauterine adhesions.

A recent retrospective study findings published in 2018 have reported that women with Asherman syndrome have a direct association with giving birth of a child with low birth weight in comparison with women who have a normal intrauterine cavity.

Researchers have expected that the defective placentation in pregnant women with Asherman syndrome is a cause of intrauterine growth retardation.  This may occur because of the history of Asherman syndrome associated with endometrium damage. Resultant of this can cause poor blood perfusion in the placental tissue because of the reduced supply of blood in the uterus and placenta.